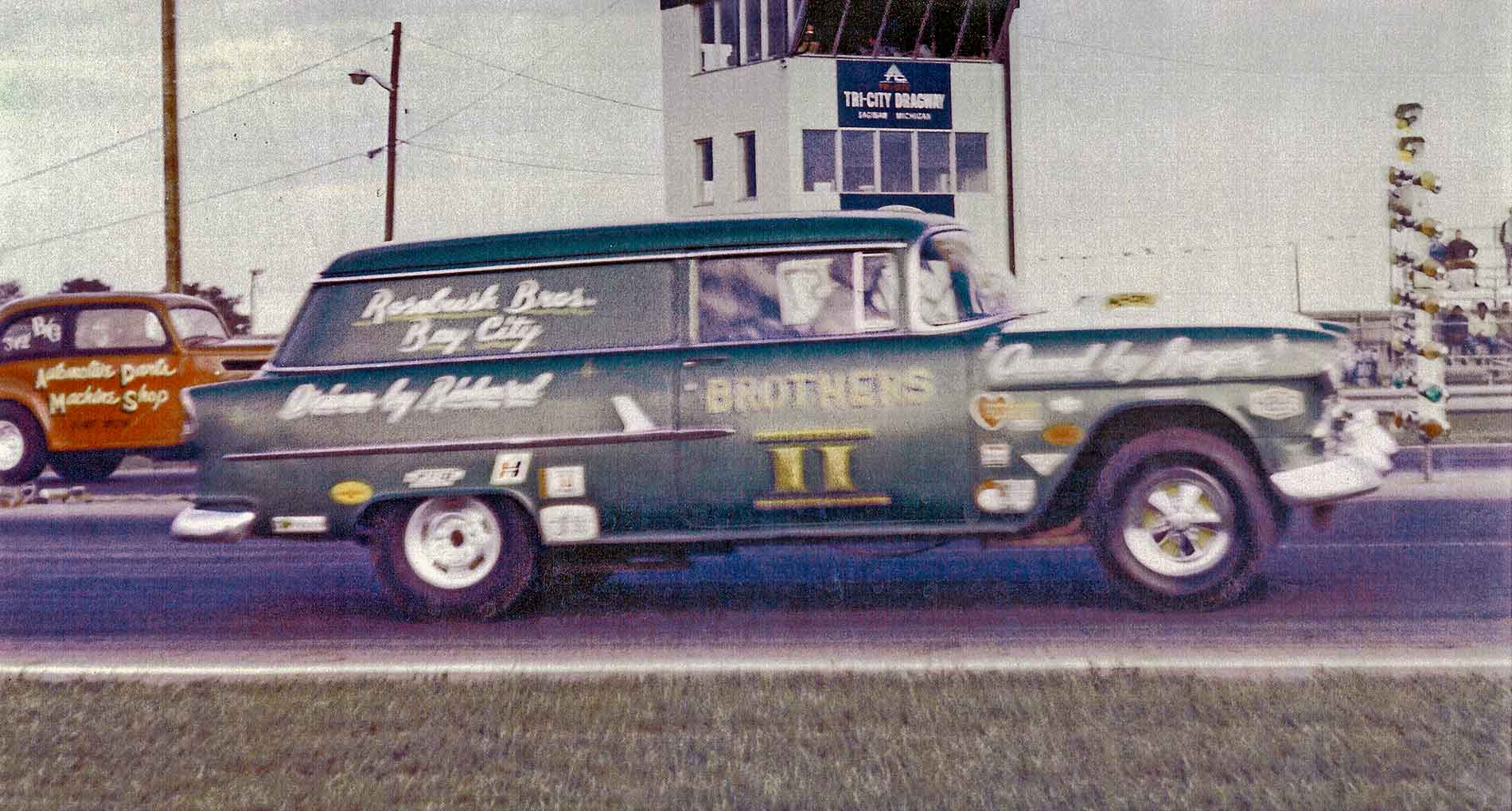 Today, I’ve set the Wayback Machine for 1970 and the birth of Rosebush Racing. it all began when neighbor Mike Carroll was racing a 1955 Chevrolet Sedan Delivery. When Mike decided that he wanted to change race cars the Brothers Rosebush were quick to scoop up his old machine.

Purchasing it less it’s engine and transmission the brothers PUSHED their new Sedan Delivery the one short block to their house. Although the vehicle was originally built for NHRA’s Modified Production class the brothers decided that an Eliminator that was being contested at their local Tri-City Dragway was much more to their liking.

Called Factory Experimental, an eliminator name that had been previously discarded by the NHRA, was a hot point of activity at Tri-City. Ten classes, A/FX through K/FX, made up the eliminator based on the size of your engine and the weight of your race car.

With twin brothers Roger and Richard campaigning the car it was very successful. Richard (RIP) was the driver and Roger was the tuner. The car was so successful that it never lost in its class and it dominated the eliminator.

The Sedan Delivery was powered by a 292 CID Small Block Chevrolet engine with a single four-barrel carburetor. Roger remembers that it had the very best of everything that was legal for that class.

The aforementioned 292 CID engine was equipped with Chevy’s Power Pack heads and backed by a Muncie 4-Speed transmission. The power reached the ground via a stock ’55 Chevrolet differential that was using a set of 4.88:1 gears and the stock rear axles.

Such familiar speed equipment as a Hurst shifter, Grant steering wheel, Casler racing slicks, Sun tach, and a Dual-Feed Holley carburetor were all part of the SD’s total package.

Sunoco 260 gasoline, purchased on the way to the track, and a Ford Thunderbolt-style tear drop hood scoop rounded out the SD’s race-ready setup.

The brothers would go on to race the Sedan Delivery successfully for a year or two before deciding that their need for speed was not being totally met by a 292-powered race car.

Their next racing machine would be powered by the 427 CID Big Block Chevrolet engine that would give them the increased performance that they were looking for. But that’s another story for another day.

For now, the 50-Year legacy of Rosebush Racing was up and running with that humble Sedan Delivery.