Whether on the streets, at the strip, or in the shop, the Rosebush family has a 53-year history of racing, street performance & aftermarket manufacturing. We eat, sleep & breathe all things automotive & want to share our passion for motorsports with you. So, check out our website & follow us on social media for project updates, performance parts offerings, a little family history & lots of bench racing. Let’s go!

The Donation of an Eight Year Project 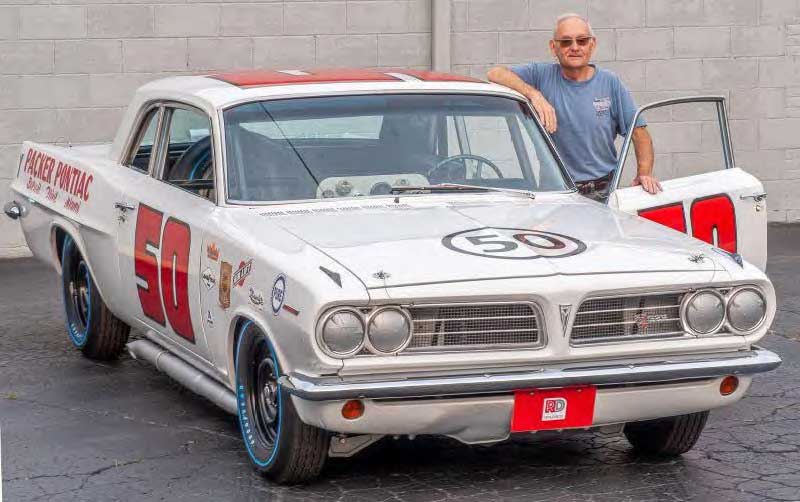 DAYTONA BEACH, Florida (June 29 , 2022) — A near-perfect recreation of the Pontiac Tempest that shocked the racing world in 1963 by beating Ferrari GTOs and factory Corvette ZO6s at Daytona, and in so doing served as the launchpad for the fabled Pontiac GTO later that year, will arrive later this summer at the Motorsports Hall of Fame of America (MSHFA). The MSHFA is located on the grounds of Daytona International Speedway (DIS) where the world-beating Pontiac made history nearly 60 years ago.

The original car, built by Ray Nichels (MSHFA Class of 2021) under the direction of then-Pontiac Chief Engineer and GTO mastermind John Z. DeLorean and driven to victory by Paul Goldsmith (MSHFA Class of 2008) in the 250-mile February 16, 1963, American Challenge Cup, was purchased shortly thereafter by Mercedes-Benz and taken to Germany. After a series of tests to determine how it performed so well, it is believed the Stuttgart-based firm scrapped the car in the 1960s. 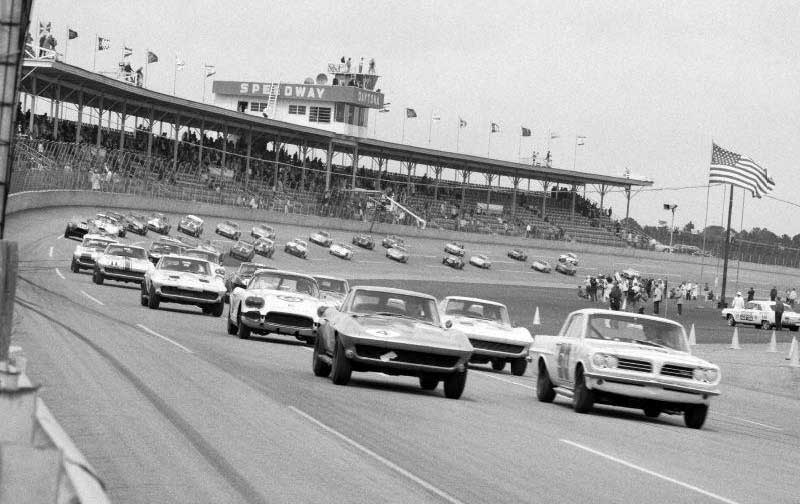 “We are so grateful to Deb and Roger Rosebush for donating the legendary No. 50 Pontiac Tempest to the Motorsports Hall of Fame of America,” said MSHFA President George Levy. “John DeLorean had an idea for putting a big engine in a Tempest and wanted to show the world what it could do, so he authorized construction of the original No. 50 — in essence the first Pontiac GTO. The production version got its name, in part, from the No. 50 beating the Ferrari GTOs here at Daytona.”

In 2014, longtime racers Rosebush and Jim Luikens decided to recreate the long extinct car using as many original, period-correct parts as possible. Which was a major undertaking, because the original car was one of a dozen lightweight, dual-quad 421 CID Super Duty V8-powered Tempests that Pontiac built mainly for drag racing in the fast-rising A/FX (Factory Experimental) class. 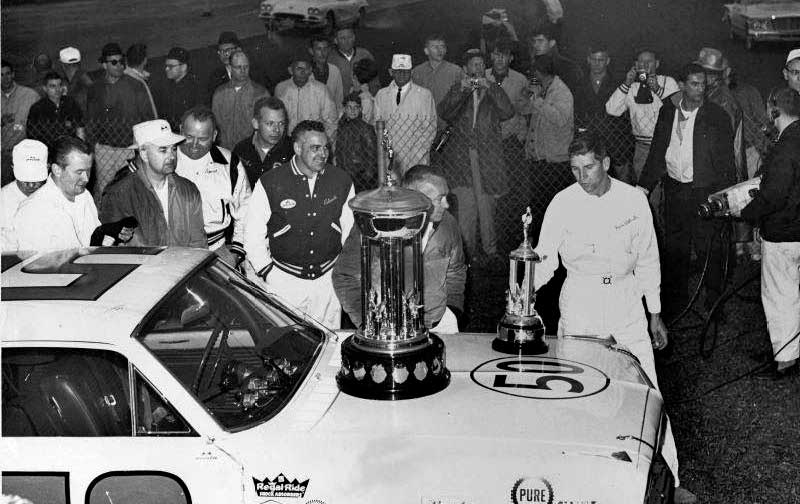 The engine featured a forged steel crank and rods, high compression (11.0:1) forged aluminum pistons and dualquad Carter carburetors. It was rated by Pontiac at 405 HP, but actual horsepower was closer to 500.

Mickey Thompson (MSHFA Class of 1990) is thought to be the first person to put a Super Duty 421 into a Tempest. The 12 factory cars followed. One of the 12 was campaigned by DeLorean’s late brother George DeLorean.

Unlike the other 11 Super Duty Tempests, the No. 50 car was sent to Nichels Engineering in Merrillville, Indiana to be turned into a road racer. Nichels was under contract to Pontiac primarily to develop and campaign cars for USAC and NASCAR Cup Series stock car racing. Racing was critical to Pontiac’s emerging performance image. Together, Goldsmith and Nichels had won the 1961 and ’62 USAC stock car titles. Pontiac won its first and only NASCAR manufacturer’s championship in 1962 as well. Joe Weatherly (MSHFA Class of 2009) won consecutive NASCAR driver’s titles mainly in Bud Moore (MSHFA Class of 2013) Pontiacs in 1962 and ’63. The idea for the GTO originated with a suggestion by celebrated Pontiac engineer Bill Collins to continue that success.

“What is seldom stated is since Pontiac was heavily involved in racing at the time,” says Collins, “my rationale for the larger engine was for campaigning the Tempest in stock car racing.” Collins proposed extending the wheelbase as well to make the intermediate-sized car eligible for NASCAR competition.

Like the other 11 cars, the Nichels Tempest had lightweight aluminum front-end sheetmetal, acid-dipped bumpers, a rear-mounted battery and no radio, heater or sound-deadening. The Super Duty Tempests also had another advantage more favorable to road-course work than the dragstrip, near perfect 50/50 weight distribution: 1,737 lbs on the front axle, 1,757 on the rear. Part of the reason the weight was more balanced than in most front-engine cars was because power was delivered to the rear wheels by Collins’ brilliant rear-mounted 4-speed PowerShift transaxle with torsion bar driveshaft. 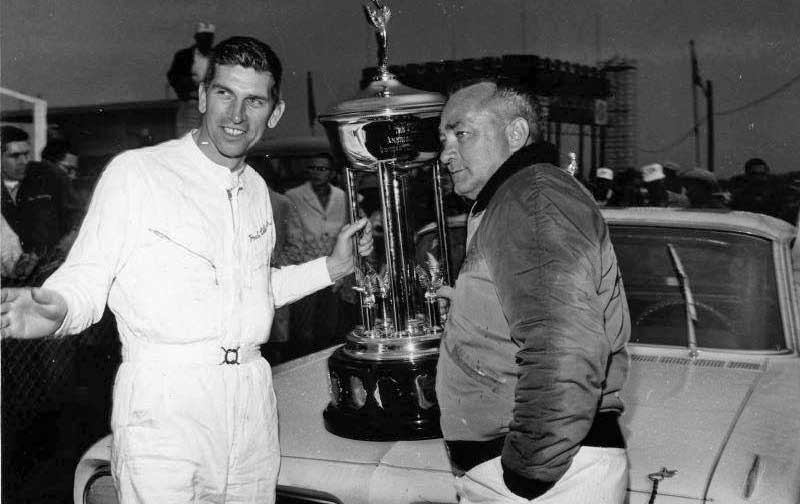 Nichels maximized the No. 50 for track use by modifying the springs, shocks and steering, and by adding a roll cage, NASCAR brakes and Goodyear Blue Streak racing tires to replace the drag slicks. To keep the motor healthy in contests longer than a quarter mile, he installed oil coolers and a special alloy radiator with Corvette expansion tank.

“After finishing the recreation of the No. 50 Pontiac Tempest race car and the recent loss of my project partner, Jim Luikens, I was thinking about what I should do with the completed project car that would allow the public to enjoy it and learn from it as much as I did while working on it,” says Rosebush, who serves on the Motorsports Hall of Fame of America Board of Directors. The car is expected to arrive at the Hall of Fame on or about his birthday, July 20.

“During the past few years, the No. 50 race car has been invited to be on display at the 2020 and 2021 Motorsports Hall of Fame of America Induction Ceremonies at M1 Concourse in Pontiac, Michigan. This group of people really showed us a great time and instantly Jim and I fell in love with their celebration. We were also honored to show the No. 50 Pontiac Tempest at the EyesOn Design concours on June 19, 2022, in the Detroit area,” says the longtime Bay City, Michigan resident. “What a privilege it was to be invited to this premier show.”

Creating a road racing version of one of the Super Duty Tempests was the brainchild of DeLorean, who wanted to set the stage for the introduction of his revolutionary Pontiac GTO. The GTO was the first of the American bigengine- small-chassis muscle cars that came to define the ‘60s.

That the car beat Ferrari GTOs at Daytona led DeLorean to name the new big-engine Tempest option he was planning to introduce in the fall as a 1964 model GTO for Gran Turismo Omologato. His idea of an American “homologation special.” 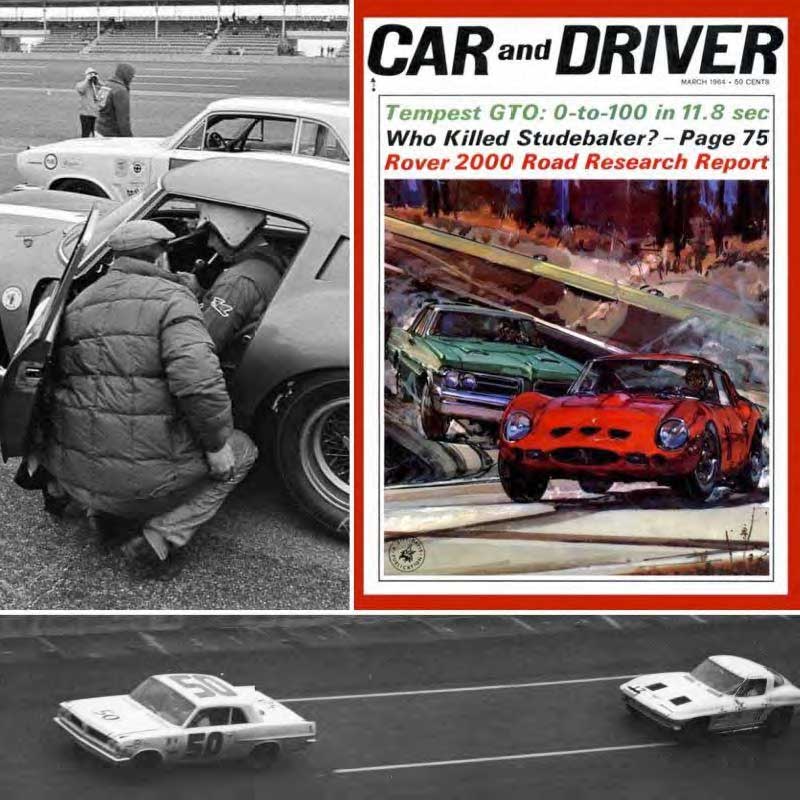 It also prompted Car and Driver to create possibly the most controversial car enthusiast magazine cover story of all time in its March 1964 issue in which it pitted the Pontiac GTO against a Ferrari GTO, in effect a roadgoing rematch of the Daytona showdown.

After the landmark Daytona race, Nichels sold the No. 50 to Mercedes in part because Pontiac, in response to a January 24, 1963, GM corporate edict banning further direct participation in racing, no longer had a use for it. According to Collins, the edict also ended discussion of extending the wheelbase of the upcoming Tempest-based GTO to (ironically) homologate it for NASCAR. 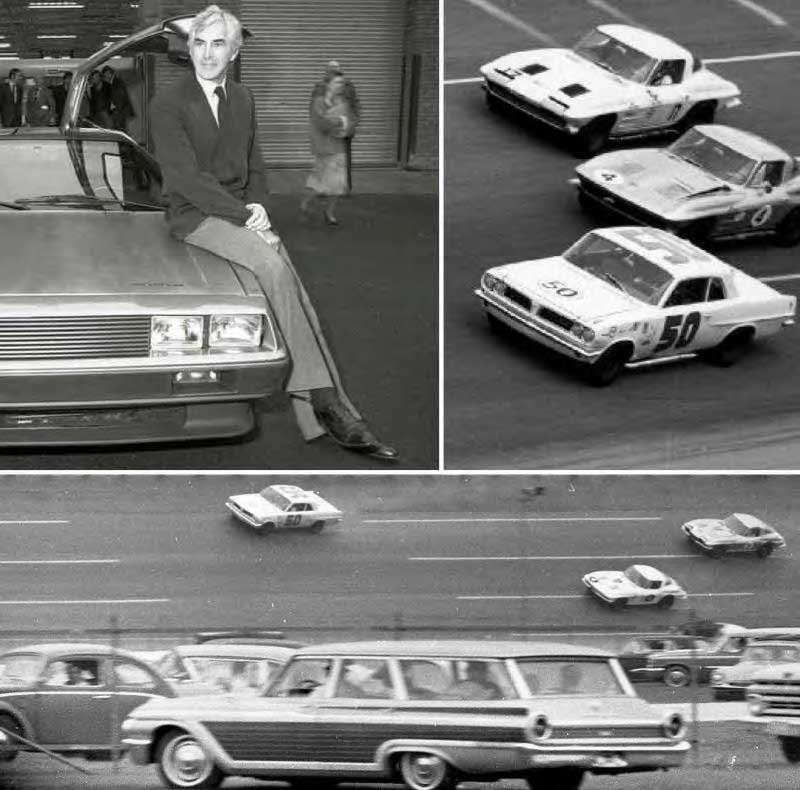 Regardless, the No. 50 held a special place in DeLorean’s heart ever after. From an August 1965 Car Life interview:

“Testimony to DeLorean’s enthusiasm is a set of framed pictures on his office wall, showing Paul Goldsmith in Tempest No. 50 charging past a Sting Ray during the Daytona Continental of 1963. It was one of the last episodes of GM involvement in racing and a DeLorean co-worker confides: ‘It was the high point of (DeLorean’s) career.’”

“We have been blessed for over 50 years doing what we love, competing in drag racing with our Rosebush Racing team. In our business we are also thrilled to be able to work and play in the automotive aftermarket,” says Rosebush. “Through all of our interactions in both business and racing, the one constant in our decision-making process has always been ‘Pay It Forward’ and we will continue to show this through everything we do. Finally, for the more than 50 people and the Motorsports Hall of Fame that made this No. 50 Pontiac Tempest recreation possible, ‘Thank You and may God Bless America!’”

About the Motorsports Hall of Fame of America: The MSHFA is the only hall that honors all American motorsports: cars, motorcycles, airplanes, off road and powerboats. Its mission is to celebrate and instill the American motorsports values of leadership, creativity, originality, teamwork and spirit of competition. Founded by Larry G. Ciancio and Ronald A. Watson, it held its first induction in 1989. Watson spent the next 30 years tirelessly building it into the nation’s premier such hall of fame until his passing in 2019. The original museum in Novi, Mich., relocated to Daytona Beach, Fla., in 2016 and greets more than 100,000 guests a year. MSHFA is operated by the nonprofit Motorsports Museum and Hall of Fame of America Foundation, Inc.

Photos courtesy of the NASCAR Archives & Research Center and the GM Media Archive. 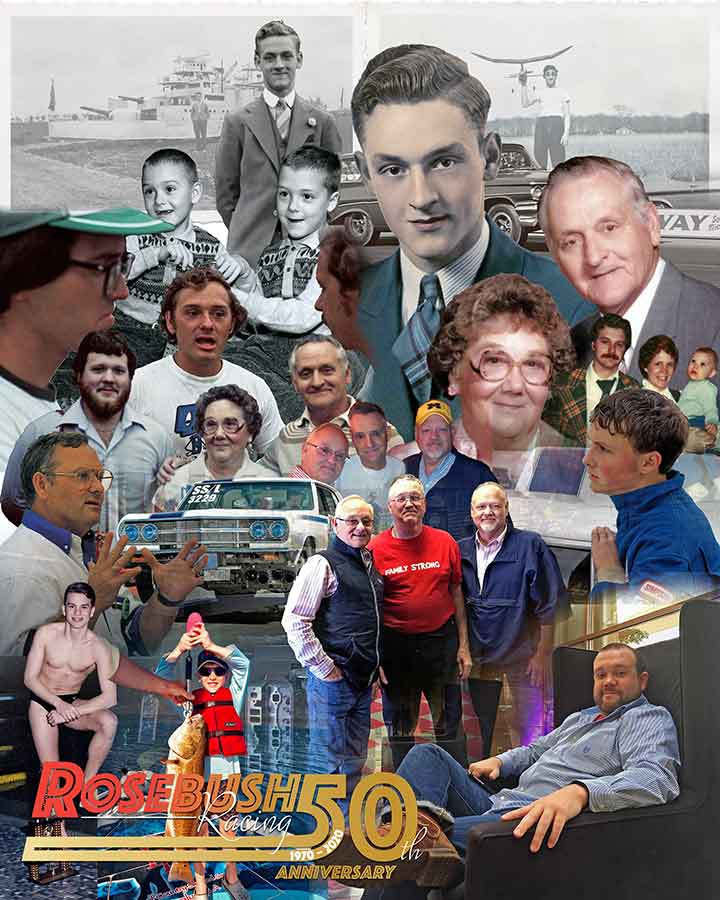 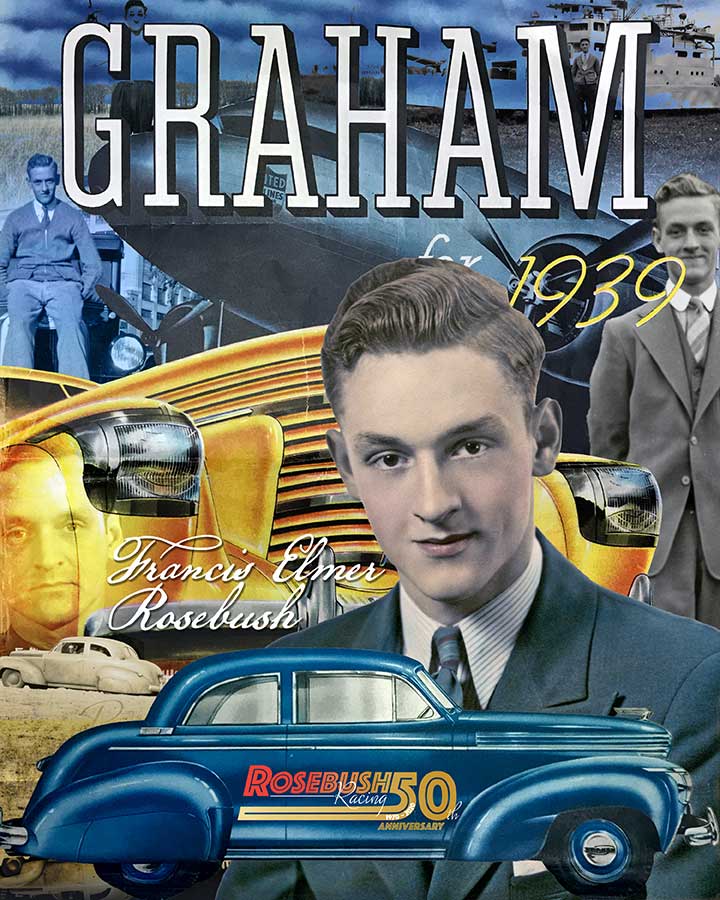 The Rosebush Brothers Terry, Richard, Roger, Mark are from Bay City Michigan. We started our Racing career in a garage that we built at our Family’s home in 1970, we called it Shaker Automotive or Shade Tree Auto due to the tree we used to pull motors & service neighborhood car repairs. This would earn extra racing dollars to fund our life long racing habits. 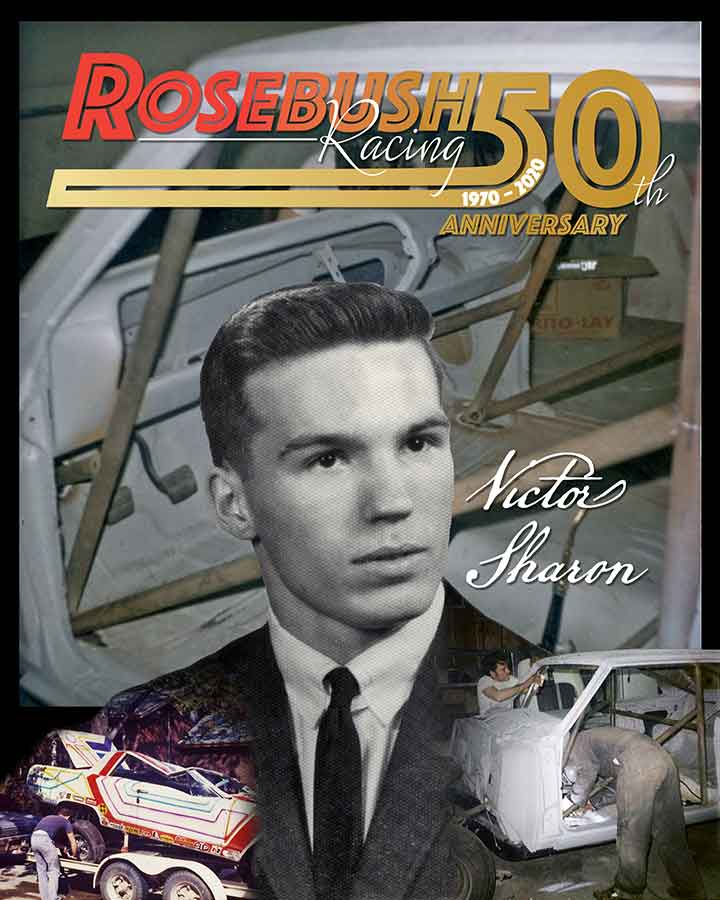 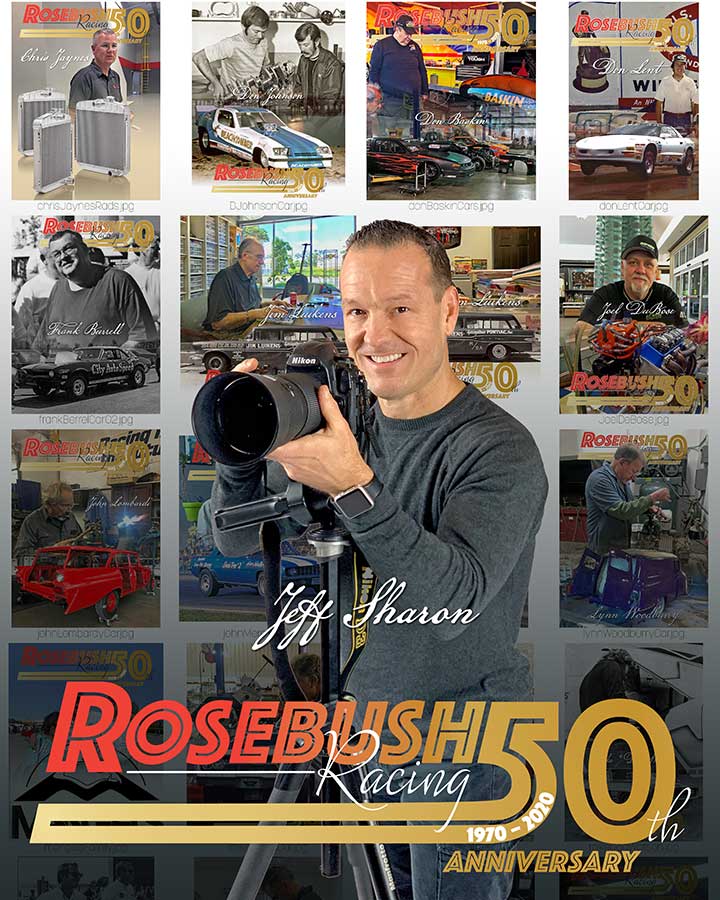